After experiencing the macro-UK that is the Falkland Islands, the next part of the journey was to go south of all real land, go through the Beagle Channel and Magellan Strait, visit the most southern city in South America, travel through glacier-filled Chilean fjords, and then head north to explore the west side of this continent.

From the Falklands, we headed due south (to bypass Argentine waters) and then due west to attempt the passage around Cape Horn.  I say attempt because this can be a challenging effort even in the summer and regardless of ship size; fortunately the waters were "the great lake" rather than "the great shake" on the day we got there.

Cape Horn is essentially the most southern point of land in South America and is located on Isla a Hornos (also known as Hornos Island and Hoorn Island).  The island is part of a group of small islands at the southern end of the Tierra del Fuego archipelago and the Cape Horn waters are the meeting point for the Pacific, Atlantic and Southern oceans.  The currents from the three oceans can create some extreme weather.  While the summers can sometimes be rough, the winters bring gale force winds of over 100 mph and waves more than ten storeys high, and so "rounding the horn" and going through Drake Passage (named for Sir Francis Drake) has always been a legendary act of daring among sailors.  However in the early days of plundering and trade across South America, even though this was the shortest route to cross from one side of the continent to the other, the treacherous conditions made for a perilous journey and early traders chose to move their goods by land instead.  Despite years of border disputes between Argentina and Chile, it is now internationally recognized today that Cape Horn is Chilean territory and their navy maintains a lighthouse and station on Isla a Hornos.  Nearby the main station on the island, a memorial has been erected in the shape of an albatross to remember the thousands of sailors who perished while trying to "round the Horn."  I passed Cape Horn and now can say that I've been as far south as 56deg. 56min. south, which is sort of cool as I've already been north of the Arctic Circle during my time working in Whitehorse.

North of Isla a Hornos, the Beagle Channel traverses east-west within the Tierra del Fuego group of islands, and separates the main Tierra del Fuego island in the north from the smaller islands to the south and west.  The channel's eastern part is the formal Chile-Argentina border, while the western 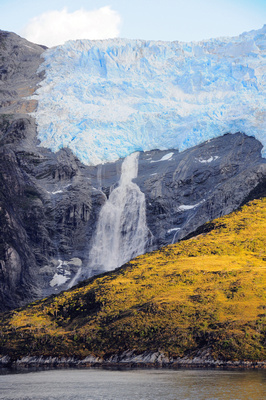 section lies completely within Chilean territory.  As the name suggests, the channel was named after the HMS Beagle which was the ship Charles Darwin travelled in when he explored this area in 1833-34.  For me, it was a beautiful morning as we slowly headed west in the Beagle Channel; the first glacier appeared about 8am on the starboard-side and two others popped up further down the channel.  These glaciers are among snow-covered mountains in the part of the Andes range that essentially sinks into the ocean a this southern tip of S. America.  To cap of a great journey through the channel, some Dusky dolphins appeared in early evening and swam alongside for some time. 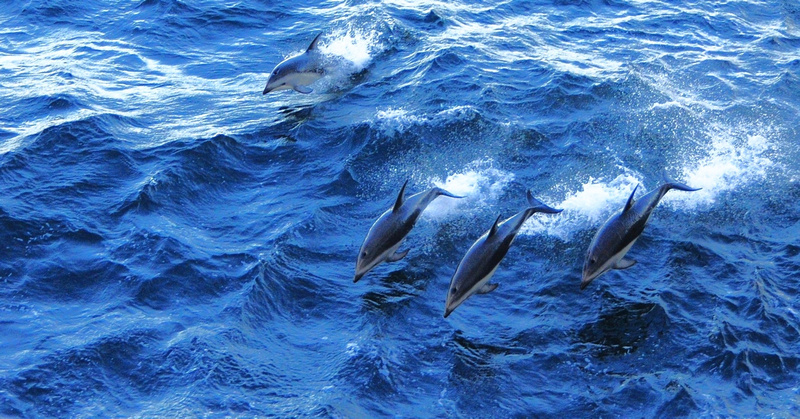 The Strait of Magellan is a key passageway between the Atlantic and Pacific oceans, north of the treacherous Drake Passage.  The strait is named after Ferdinand Magellan, who discovered the strait in 1520 during the first successful circumnavigation of the planet.  Although it is a safer alternative to the storm-laden Drake Passage around Cape Horn, Magellan Strait is still considered a difficult route due to its often foggy and windy path through numerous islands and narrow channels.  Prior to 1914, the strait was an important sailing route but the completion of the Panama Canal led to a saferand much shorter alternative for marine movement of goods, but it is still used by many ships rounding South America today.  At the heart of the Strait of Magellan sits the Chilean city of Punta Arenas, the largest city south of the southern 46th parallel and most-southern city in S. America.

Punta Arenas ("Sandy Point" as it was earlier known) is a gateway city with Patagonia to its north, glacial fjords and national parks to the west, Cape Horn to the south and Tierra del Fuego to the east.  Located on a peninsula north of the Strait of Magellan, 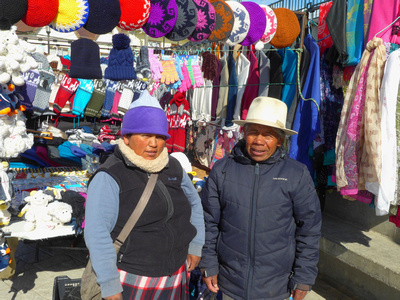 the city was originally built in 1848 as a small penal colony to maintain sovernity of the strait, and it continued to grow due to increasing traffic and trade travelling through Magellan Strait to the west coasts of South and North America.  Later on, in the late 1880s and  early 1900s, a gold rush and sheep farming led to an influx of Europeans (mostly Russian and Croatian) and their influence is reflected in the names of many shops, streets and buildings today; and many of their descendants continue to live here.  Punta Arenas is the main corridor to the Antarctic and so there are all sorts of scientific groups, travel companies, government agencies and companies providing related-services located in the city; and in addition, tourism, fishing and general trade provide a sound base for Punta Arenas to continue to flourish as a connector between the Atlantic, Pacific and Antartica.

Heading out of Magellan Strait, we entered the many channels and fjords that start up the west side of Chile.  Unfortunately the weather finally decided not to cooperate and we had a couple of cloudy grey days as we sailed in and out of fjords with steep sides and waterfalls from melting glaciers.

I've included a map of this part of S. America as the first photo in the "Southern Tip of Earth" gallery.  Take a look at the white boxes as they identify some of the places/waterways I've written about, and check out the route (red dashed line).  Cheers!