As much as I liked Sydney, I really liked Melbourne even more!  The main parts of the city are on either side of the Yarra River and the city planners have 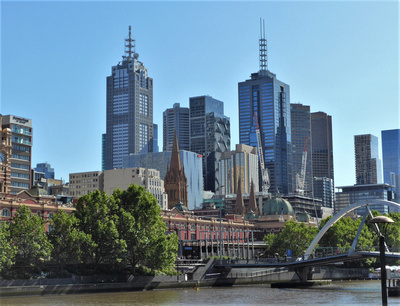 Footbridge across the Yarra River towards Flinders Street

done a terrific job in making sure that the river banks serve as great walking, cycling and meeting zones for the growing city around them.  Melbourne is
literally growing upwards - I've never seen buildings as tall as some of the ones currently being built there.  I had thought about going up to the Observation Deck on the Eureka SkyTower but never made it, perhaps because there are already taller buildings being built and likely blocking the views!  However among the skyscrapers, there is a lot of old beautiful architecture right in the city still. 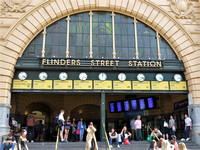 The large Flinders Street Station is your classic colonial-style railway station and stands boldly kitty-corner from the equally magnificent Melbourne Cathedral.  Flinders Street is one of many all around Melbourne that have trams running along them and, along with the bus system, create a great transportation system for getting around the whole region.  Among the high-rises there are lovely old lane-ways with original brick buildings that today house many of Melbourne's cafes and restaurants, along with boutique shops and offices.

botanical gardens that create a calm feeling to the city, and it's not surprising that a few locals told me Melbourne is considered the "most livable city in the world".  I'd debate that but only mildly - it really does have a calm feel about it even though it's home to some 3.5 million people.

A large part of my day was spent out of downtown.  Being in Australia, I couldn't leave without having seen some of the animals that are unique to this part of the world.  Therefore I took one of the trams out to the Melbourne Zoo and the visit was well worth it.  It was Remembrance Day and the zoo was full of little (5-7yr olds) kids all dressed in school uniforms.  Luckily the zoo is divided up into many separate sections and so it didn't seem busy at all, and I managed to relax while seeing the classic kangaroos, koalas, emu and lots of other animals facing extinction (the Melbourne Zoo is one of four focusing on species facing extinction).

As with Sydney, Melbourne is certainly a place one needs to spend a week or more in and 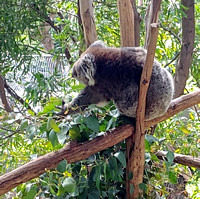 it'll be on the list next time
I happen to make it to this part of the world.  You can check out all the central 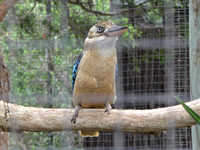 Melbourne and Melbourne Zoo photos in the Melbourne gallery under the 2019-South Pacific collection.  G'day!!

Tasmania blog and photos to come next!!