"Away, I'd rather sail away; Like a swan that's here and gone"

Before going into the exotic islands of the Caribbean, I had one last port of call on the South American continent - Cartagena, Colombia.  Like other S. American capitals, Cartagena has a rich colonial past going back to the 16th century and today is a city with a broad blend of preserved history and modern development.

Cartagena from the sea - old city is on far right

Cartagena was founded as Cartagena de Indias in 1533 by the Spanish conquistador Don Pedro de Heredia and, due to its strategic location in S. America, the city grew in importance as it became a key port for exporting wealth (especially gold and silver) from the newly discovered continent to Spain.  As Spanish ships travelled in convoys to Spain only once a year, treasure for export was stored in the city for much of each year and inevitably pirates came onto the scene in numbers.  Dutch, French and English pirates attacked often and, in 1586, Francis Drake 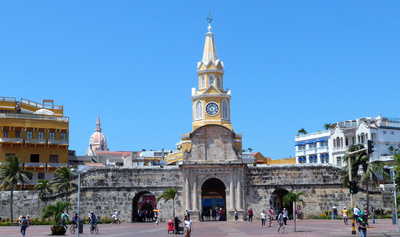 captured the city with the aid of a thousand desperados and proceeded to loot it of its wealth while burning much of the city to the ground, before leaving when there was nothing left of value.  With raids by pirates continuing, Cartagena was fortified via fifteen forts built in the inner walls and six more in the outer fortification ring.  In one of the last pirate raids, a large British fleet led by Admiral Edward Vernon attempted to take the city but were met by a Spanish Admiral named Don Blas de Lezo who in earlier battles had already lost one eye, an arm and a leg.  Faced with heavy losses and the spread of disease, the British suffered an embarrassing defeat -- but one in which the British Admiral introduced the practice of the "naval rum ration".

In the mid 1500s, Cartagena also became a main port for the slave trade, with the slaves being sold in the main square and then moved to all parts of S. America.  The Spanish were not pleased with this and eventually the feared Spanish Inquisition came to Cartagena.

In the early 1800s, with increasing tensions between the local people and their Spanish rulers, ‌the region of Cartagena declared independence from Spain.  A series of bitter sieges and recriminatory actions by the Spanish followed in which over six thousand locals died, but in October 1821 the city was taken by local patriots and Spanish rule came to an end.  For the next hundred or so years, Cartagena was of little importance but all that changed when oil was discovered and a refinery was built in the Bay of Cartagena in 1926.  Since then, the city has been Colombia's leading port for the export of oil and a key port for platinum and coffee exports.

The old walled-city of Cartagena is a major draw for tourists from across South America.  The old city features narrow winding laneways with the same colonial buildings as in 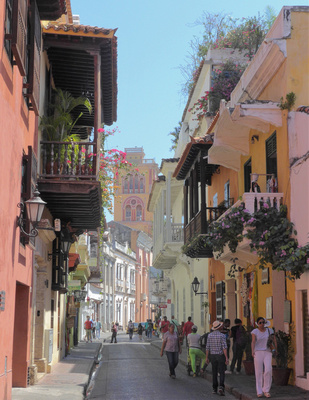 other Spanish colonial cities across the continent.  There are ornate balconies, numerous churches and treed plazas throughout the fortified city.  Today, many of the colonial buildings have been restored but converted to offices, hotels and restaurants.  At the same time as the city embraced its colonial past, Cartagena is a growing city with large white skyscrapers spreading across its coastline and modern hotels and businesses popping up in numbers.  The city certainly appears more affluent than the cities I visited along S. America's west coast - as clearly seen in Cartagena's harbour full of sailboats and yachts 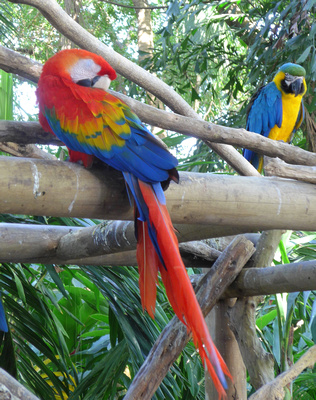 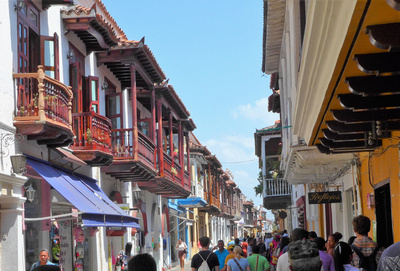