Entering the harbour in Port Chalmers

The Otago Peninsula is what you may have seen pictures of in terms of sheep grazing on green hills, blue water harbours and wildlife unique to this south island region.

The main city in the Otago Peninsula is Dunedin, with Port Chalmers being a suburb some 15 kilometres away.  Port Chalmers is the main port for Dunedin and the region as it contains the only part of the Victoria Channel and harbour that is navigable by larger ships.

Dunedin itself is often referred to as New Zealand's architectural heritage capital, with its history dating back to settlers from 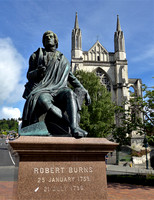 Robert Burns statue at The Octagon in Dunedin (St. Paul's Cathedral in background)

Scotland who wanted to create a town based on religion and safe community.  I was told that Dunedin was actually designed with the goal of replicating the Scottish capital of Edinburgh and maybe that's best demonstrated in The Octagon - a central feature of Dunedin that features a statue of Robert Burns right across from St. Paul's Cathedral.  Around The Octagon today are many of Dunedin's cafes and bars, and this part of town still serves as a meeting place in the centre of Dunedin

Another key part of Dunedin's history and present is Speight's Brewery.  The brewery was founded in 1876 when three employees of the existing malthouse - James Speight (a Yorkshire salesman), Charles Greenslade (a maltsman) and William Dawson

(a brewer from Edinburgh who went on later to be mayor of Dunedin and eventually an MP) - got together and bought the malthouse.

Speight got the new brewery named after him and Speight's Brewery has been a New Zealand success story ever since, winning gold medals as far back as the 1880s.  Today, Speight's Gold Medal Ale is one of the most popular selling beers across New Zealand and Australia.  I did a tour of the brewery and definitely enjoyed the tasting session afterwards (btw, in the Port Chalmers-Dunedin photo gallery, check out the old photo of the brewery staff from 1932 and see if you can spot the Paymaster...look closely).

Sailing out of Port Chalmers, we passed Goat Island which is home to some of the unique bird species that live in the Otago Peninsula region (including the northern royal albatross).  This is a beautiful part of New Zealand and in some ways reminds me of the beauty of British Columbia. 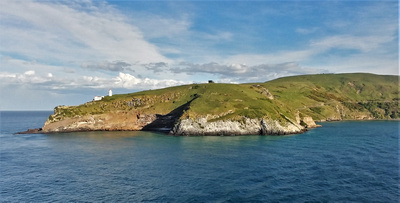