"It may be raining; but there's a rainbow above you."

[My apologies for not getting the descriptions in for the Montevideo photos.  Wifi is slow, spotty and expensive - and my time ran out before I could add in that info.  I've now updated them with titles/info]

Even though all the previous places I've written about have been uncharted waters in terms of my explorations, walking about in the Falkland Islands really does give me a bit of a special feeling.  I'm really south now; about four hundred miles east of the southern coast of Argentina (one says that name quietly on these islands).  The Falklands are actually two larger islands, each about 80 miles north-south and 140 miles east-west, and some 700 smaller islands.  These two main islands are romantically named East Falkland and West Falkland, and the capital of Port Stanley is home to the majority of the three thousand residents.  Interestingly, it is purported that there are anywhere from one hundred to three hundred sheep for every human in the Falkland Islands, making it the highest number of sheep per capita of anywhere in the world!

The Falkland Islands have an interesting history, including: exploration by French, Portuguese, Dutch and English sailors in the 16th and 17th 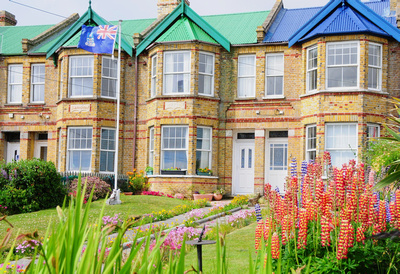 centuries; visits by Charles Darwin on the HMS Beagle in March 1833 and March 1834; British Navy sinking four German cruisers in 1914 and also a German destroyer during World War II; and a serious conflict in 1982 when Argentina invaded the islands but were defeated by British forces after 72 days of fighting (strong tensions are still very evident today and thus "Argentina" is a bad word here).  As a result of this history, there are a number of museums and other points of interest in and around Port Stanley, along with a weird presence of all things British - even though this British territory is over 8,000 miles from its motherland.  There is no doubt though that the main attraction for travellers here is the diverse wildlife.

The islands and their waters are home to seals, sea lions, whales, dolphins and countless species of birds, most notably five species of breeding penguins.  The many wind-swept bays and coves are home to King, Gentoo, Rockhopper, Magellanic and Macaroni penguins; the colourful King and slightly smaller Gentoo being the most common.  Although it was a very windy day out at Bluff Cove, I had a great time wandering among the many King and Gentoo penguins that raise their young there.

The King is the second largest penguin after the Emperor and, after near extinction, there are now one 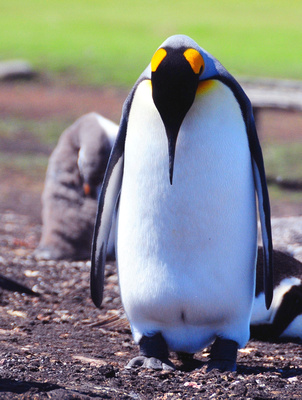 thousand breeding pairs of King penguins around the islands.  The King penguin is 36 inches tall and is distinguished by a bright orange patch on its head and an orange/yellow neck.  They lay only one egg which is incubated for 54 days on their feet and gently shifted from male to female and vice versa as they take turns to go out to sea to hunt for fish and squid.  After hatching, the young King penguin  is kept warm on its parents' feet until it is big enough to stand alone and will stay with its parents for about a year. 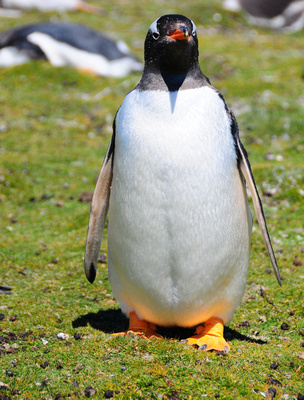 The other common breeding penguin in the Falklands is the Gentoo penguin, of which there are some 120,000 breeding pairs.  Gentoos are the third-largest penguin, about 30 inches tall and weighing 12-15 pounds.  While King penguins live up to 30 years, the Gentoo's life span is only 10 to 12 years.  These agile creatures are the fastest of all penguins and can dive for over five minutes to depths of 600 feet.  They are easily recognizable by a bright orange beak, yellow-orange feet and a white stripe above their eyes.  Unlike King penguins, the Gentoo lays two eggs in shallow ground nests and the parents take turns to incubate the eggs for approximately 35 days.  Once the chicks are born they are fed via regurgitation by both parents, and after 30 days the fluffy grey chicks form creches.  They continue to be fed by their parents for a further two months and eventually go to sea at 100 days old.  While the Falklands are home to a third of the world's Gentoo penguins, these cute birds have been classified as "near threatened". 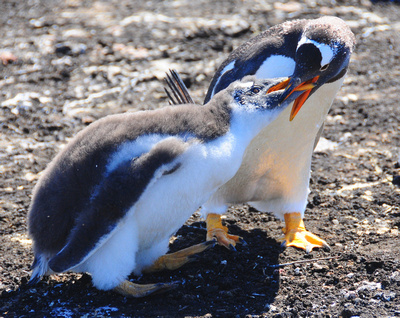 Gentoo baby being fed by regurgitation

On a funny note, locals and future tourists may see a large King penguin walking around with a Jack Nicklaus Bear Mtn golf cap one day.  When I first arrived at Bluff Cove, I went to put my lens cap in my pocket but unfortunately it slipped out of my hand and fell to the ground.  The wind picked it up and rolled it beautifully through two large groups of penguins and chicks, over some rocks and across 600 feet of sandy beach before dumping it into  the Atlantic.  All I could do was watch and laugh along with other visitors.  Then, mere five mintues later, it was my ball cap's turn to take a ride even though it was tightly on my head.  Alas, it took the same path and it too ended up in the Atlantic, prompting a local wildlife ranger to walk over to me and joke that a King Penguin will likely come up out of the water and end up with the cap perfectly perched on it's colourful head!

Visiting the penguin colony was an experience I won't forget soon and of course I took a lot of photographs.  I've included some of the best shots in my "Falkland Islands" gallery, along with a sequence of photos showing the dramatic sunset as I left the islands and headed south towards Antarctica.  I'm getting excited as we continue to head south and get close to the end of land in the south.  Hopefully I'll have some more interesting stories and photos for you!  Cheers. 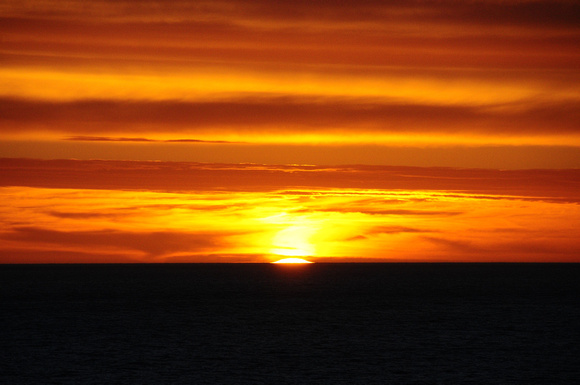