Okay so I'm a little late getting the Australia blog pages and photos up.  Part of it is due to enjoying each place as long as possible, and part of it is
because I decided to just chill on the two sea days after leaving Tasmania for New Zealand. 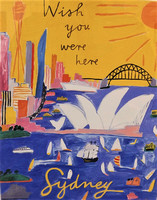 Now as for enjoying Sydney as long as possible, I have to say that I'm pissed at Holland America for only giving us six hours in Australia's largest city.  Sydney was the final destination for many people and so they got to get of the ship before the rest of us could get ashore.  As a result I got on shore around 10am and had to be back on-board by 4pm, however I still tried to make the most of the little time I had and hopefully the photos will give you an idea of how lovely the city is. 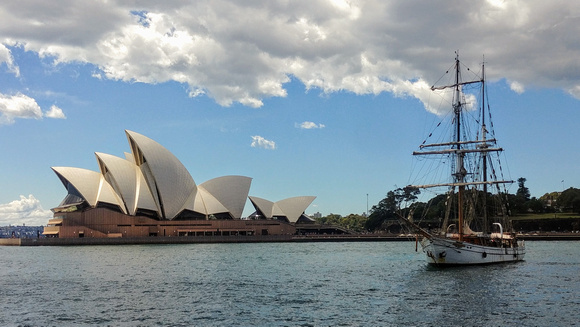 Sydney is a wonderful city built around the harbours that dot the waterfront.  These harbours are home to many of the iconic Sydney landmarks that you've no doubt seen in pictures or on tv, with two most famous being the Sydney Opera House and The Harbour Bridge.  It is not only the largest but also oldest city in Australia.  There is some 50,000 years of Aboriginal history in the area and that is combined with the dramatic influence resulting from convicts shipped from Britain and original Rum Corps settlers moving into the area.  Today Sydney is as cosmopolitan a city as I've been to.  In addition to its original influences, folks from around the world have created a cultural and ethnic vibe that's not as present in other cities.

As for my time here, I don't know if I've ever seen as much of a city in five hours as I did Sydney. 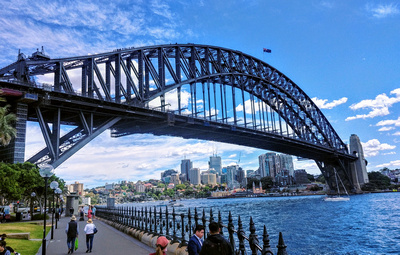 From hopping on and off open-top buses at least four times to walking endlessly, I pretty well covered most of the key areas that I thought I could fit in with my limited schedule here.

Besides the Opera House and Harbour Bridge area (lots of green space and interesting old streets/markets), I thought Darling Harbour with its Pyrmont Street Bridge was a beautifully conceived walking/business area.  Among the countless seemingly cloudy-piercing skyscrapers, there were still streets where large elm trees create green canopies over the roads, countless walking paths and green spaces connecting the various historic and urban parts of Sydney.  Sydney's diverse history, nature and culture are ever-present throughout the city and make it a place that's definitely worth spending some time in and I've already got it on my list of places to return to.

The Pyrmont Street Bridge is a public footbridge