After leaving Tasmania, my travels continued towards the southern-most tip of 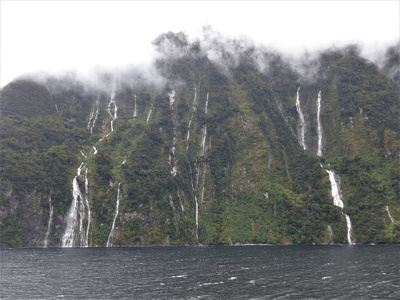 New Zealand (not counting the lone island at its very tip).  This involved cruising through the fiords of Milford Sound, Doubtful Sound and Dusky Sound - three of the main sounds, bays and inlets that make up Fiordland National Park.

Captain Cook and his shipmates were the first non-Aboriginals to travel through this area way back when in the late 1700s.  The national park was established in 1952 and encompasses an area of just under 5,000 square miles (it was also declared a World Heritage Area in 1986).  There are magnificent tree-covered mountains that tower above the low clouds and the glacier-carved fiords are full of waterfalls cascading into the deep blue waters.  At times the mountains look like vertical columns thrust up from the water and the many many waterfalls seem to be pouring white water from taps left open up in the clouds.

The day going through this magical part of our planet was misty and wet at times, but that just added to the extremeness of the natural beauty surrounding me - it really is an amazing spectacle of nature.

There are a few short videos from Fiordland National Park (and more photos) under the 2019-South Pacific collection that will hopefully give you a good idea of what this paradise is like.