Tasmania...wow!!  Over the years I'd always thought of Tasmania as some far away exotic and unique land way down there by Australia - and I certainly never thought I'd make it here one day but here I am in Hobart.

After the wonderful yet energetic cities of Sydney and Melbourne, Hobart's small size and rustic nature were a pleasant change.  Hobart is the capital of the state of Tasmania and is home to 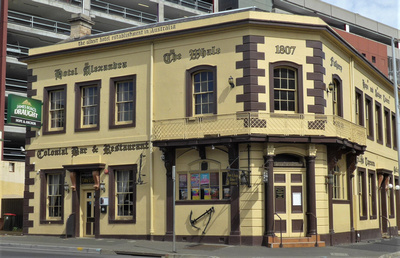 just over 230,000 people (which is about 40% of Tasmania's total population).  Coming into Hobart, you can tell that this city was established because of its ability to serve as a good port - in fact I learned that Hobart's port is actually the second deepest natural port in the world.  If you look on a map you'll see that Hobart is in the southeast part of Tasmania and is built around Storm Bay at the estuary of Derwent River, with its growth primarily being along both banks of the river and on land reclaimed from the bay.  One dominant feature in Hobart's skyline is Mount Wellington, which at over 4,000ft is the highest point on Tasmania.  Despite some modern developments, the city still has its old colonial architecture and some of the original ale houses and hotels are still operating (with modern amenities and beverages of course).  One of the oldest and best examples of this is the Salamanca district which is an area of buildings over 200 years old that still today house restaurants, shops and offices - some of which have ties to the whaling industry that was prevalent throughout the region for many many years.

You no doubt know about British criminals being sent to Australia in the very early 1800s but many people don't know that Hobart was one of the key destinations for these criminals.  In the local museum, I learned that this part of Tasmania had actually been home to semi-nomadic Aboriginal tribesmen for as long as 35,000 years prior to British settlers arriving.  Hobart is naturally the financial and administrative centre of Tasmania and serves as the major tourist hub between mainland Australia and New Zealand.  The city is full of restaurants and art galleries that represent the variety of cultures that are present across Hobart and Tasmania today.  There is a major university in Hobart that has a large fine arts program and much of the student art is displayed throughout businesses, galleries and even lane-ways across the city.

Part of the stained glass along the bar in The Whaler

You can check out all my photos from Hobart in the Hobart gallery under the 2019-South Pacific collection folder on this site.

With more time, spending a few days in Tasmania's natural beauty across the state would be in order - for now it's on to New Zealand!