"I dreamed I saw the silver spaceship flying, in the yellow haze of the sun"

Chile is a very long country along its north-south axis on the west coast of South America.  Once out of the fjords in the deep south, the expedition made the long journey up the Pacific, stopping in three key Chilean ports:  San Antonio, gateway to the capital Santiago and surrounding wine regions; Coquimbo, gateway to Chile's "Norte Chico" (Little North) region; and Arica which is Chile's most northerly city at only twelve miles from Peru.  These are some of the oldest cities in S. America and the surrounding regions hold evidence of an even more ancient history.

The entire length of Chile is defined by the Andes Mountains that extend some 5,000 miles down western S. America and then seem to slide into the cold waters at the tip of the continent.  The Andes are responsible for the other main geological feature of northern Chile, the Atacama Desert.  This extremely arid desert stretches 1,000 miles from the Peruvian border to just north of San Antonio.  The Atacama often receives no rain for years on end, primarily due to cold Peruvian winds cooling any moist air and creating fog that embraces only the coastal regions.  In addition, the Andes prevent any moist air from the Amazon basin from coming close to the desert.

While each of these cities has its unique features and history, there are a few similarities across them.  Foremost is that all three have extensive port facilities that load and unload thousands of large tankers with containers full of commodities ranging from grains to silver to fruits and wines.  At the same time, the ports are home to countless commercial and private fishing vessels - creating a buzz of activity and painting a colourful picture as one enters each city by sea. One nice feature of each place that I really appreciated was the pedestrian-only streets full of regular shops, street vendors and musician buskers (some quite good!).  These streets create a sense of community spirit and liveliness that make them a pleasure to stroll around in.  Finally, the Spanish conquistador influence can be seen in each city through distinct colonial architecture and the presence of strong religious symbols such as statues of various saints and impressive cathedrals.  Besides walking in these port cities, I took a Greyhound-type bus, a metro system and clunky local buses to also visit Santiago and La Serena nearby.  Here's a little more on each place...

San Antonio is the busiest port on the west coast of S. America and the commercial and fishing hub for the entire Chilean coast.  It sits approximately 100km from Chile's capital of Santiago and suffered extensive damage in the major earthquake that hit the Santiago region in 1985.  Another quake in 2010 seriously damaged the port facilities but the city has recovered and is embracing its tourism potential as gateway to Santiago and the nearby wine regions.  As with other parts of Chile, archeological evidence has revealed that this area was home to hunter-gatherer settlements going back thirteen thousand years. 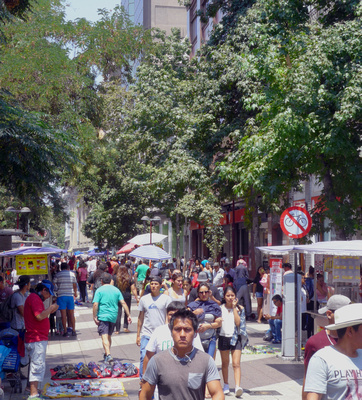 was a further short metro ride away (I really should learn Spanish!).  Founded in 1541, Santiago is a sprawling city with everything from crowded-

suburban sections to central areas featuring winding roads with grandiose Spanish-style buildings and treed-plazas.  The city certainly seems to be flourishing as the metro appears quite extensive and big retailers, hotels and restaurants have all set up here.   Again the pedestrian-only streets within the central part of the city were a nice feature - the main one has big stores on either side and locals selling merchandise (shoes, hats, smokes, clothes and other nic-nacs) on blankets strewn among the broad variety of tourists strolling along.  One of the interesting places I visited here was the Museum of Pre-Columbian Chile.  This museum had fascinating exhibits dating back thousands of years, including wooden figures known as "Chemamull" that in ancient times were placed on top of burials in Mapuche cemeteries.  These figures reminded me of the ancient totems I saw when I went up to the Haida-Gwaii islands off the British Columbia coast. 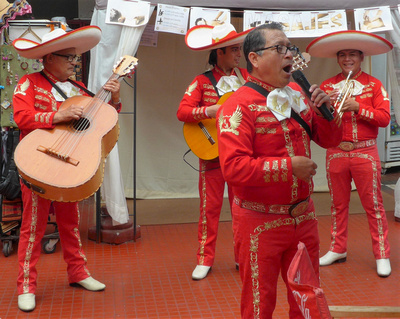 export of copper, wine and fruit from the surrounding region.  Grapes from this fertile region are the foundation for Chile's national drink, Pisco.  One of the key sights in Coquimbo is the "Cruz del Tercer Milenio" (Third Millennium Cross) which is an 83-metre tall concrete cross that overlooks the city and is considered to be the tallest monument in S. America.  From Coquimbo, I took a bumpy local bus to the more interesting colonial city of La Serena.  This city is the capital of the Coquimbo region and is more-celebrated than its commercial and fishing port neighbour.  Having been a stopping point for Spanish missionaries the city is full of churches and convents, and also features treed-plazas and boulevards and public markets.  Tourism, both local and international, is an important industry for La Serena and, with a number of nice beaches nearby, the city has become a destination for Chileans looking to get away from the bustle of Santiago (~300 miles).

Arica is just twelve miles from Peru and sits between the Pacific Ocean and the Atacama Desert.  Explorations in the valleys near Arica have unearthed some amazing finds - not the least of which are 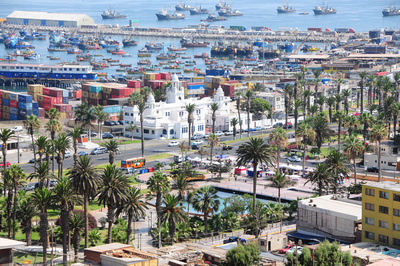 mummies of Chinchorro residents dating back some ten-thousand years.  In fact, not far from the city, ancient geoglyphs are visible on the hillsides on the edge of the desert (geoglyphs are 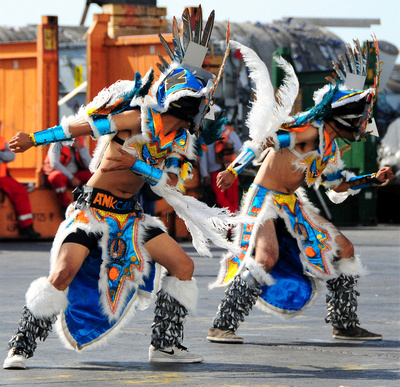 large ancient drawings of simple-form animals and humans), giving further proof that this region was inhabited thousands of years before the city's formation in 1565.  Arica's importance as a city grew once silver was discovered and exported to Spain; which led to Sir Francis Drake to stop here in 1578 and pirate away a lot of the town's silver (that 1578 voyage was the one by which he became the first person to sail around the world).  Arica has had its hard times too with major earthquakes in the 17th century, wide-spread malaria outbreak in 1713 and wars with Peru and Bolivia until it legally became part of Chile in 1929.  An interesting history in Arica is that, following a massive earthquake in 1868, it was Gustave Eiffel and his team who were tasked with rebuilding the town's cathedral and the government building (yes, the guy famous for the metal tower in Paris).  Today, Arica seems to be doing quite well with a busy port, auto assembly and fish-processing plants, and a growing tourism industry.  I liked Arica partly due to its embracing of ancient history, a strong arts and culture vibe and its friendly people.

I took quite a lot of photographs among these five cities (and journeys there-to).  As a result, I've decided to leave out examples of Spanish colonial buildings and similar stuff and instead have included more of my people-photos.  I've separated them into two sets so look for the "Chile 1" and "Chile 2" galleries if you'd like view what these places are like.  Cheers!