The large ports of Chile behind us, we continued the journey north and soon entered the waters of Peru and, two and a half days later, Ecuador.

Callao is the port city for Peru's capital city of Lima.  Only 9km from the centre of Lima, Callao is essentially a huge suburb of Lima and the two make up a densely populated capital city of some 9.7 million people, and it seems there are just as many vehicles in the city!  The roads are crowded with cars, trucks, buses and motorcycles; but thankfully many of the busy roads have their multiple lanes separated by treed boulevards featuring two-way bicycle and pedestrian paths.  The roads are so busy that it takes 30 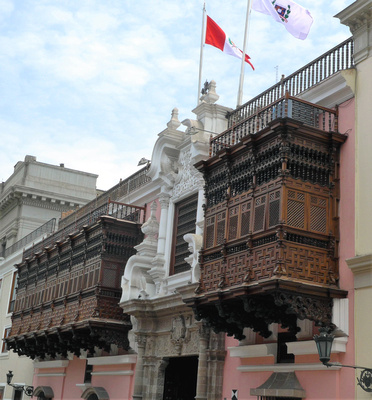 minutes to drive just10 kilometres either in a car or a bus.  Despite a few warnings of pickpockets and "gangs", I ventured on a local bus to get to the heart central Lima.  The two sol ride (compared to $15 taxi fare) was fine; the bus was relatively comfortable, buskers and popsicle vendors would hop on for couple of stops at a time and people got on and off whenever it slowed down.  I got off on the super busy Avenida Abancay at its junction with the pedestrian-only Jiron Ucayali (I think "jiron" means street) and walked along Ucayali towards the main Plaza Major (like in other S. American cities, this "Plaza des Armas" is the main square).  Jiron Ucayali is a beautiful wide street with some great examples of the magnificent early architecture of Lima.   In particular, this pedestrian-only street has buildings that feature the unique wooden balconies Lima is known for.  These balconies were additions to buildings as a form of "air conditioning" and are beautiful wooden structures secured to outside walls with either iron brackets or ornate wooden frames.

Lima was formed by the Spanish in 1535 and christened as "Ciudad de los Reyes" or City of Kings.  It was the jewel of the colonial S. America and there's still evidence of that in the churches, mansions and other attractions in the central Plaza Mayor and surrounding historic district.  The Plaza Mayor is home to the large Government Palace, the mustard-coloured Municipal Hall and the ornate Basilica Cathedral of Lima.  Besides Plaza Mayor, there are others plazas (such as the UNESCO World Heritage site Plaza San Martin) and interesting areas around Lima that make the city a popular destination for tourists from other parts of Peru and S. America.  Of course, one can't talk about Peru without mentioning Peruvian ceviche.  This dish consists of shrimp, fish and shellfish cooked and marinated in lemon juice, coriander and onions and then served cold.  Ceviche is available across Chile, Peru and Ecuador (I didn't see it on the eastern side of the continent), but apparently Peruvian ceviche is the best of them all.

Quito, the capital of Ecuador, is actually 150 miles east of the port city of Manta where we docked.  Manta itself is rather quiet but it is the main Ecuadorian port and is the centre of the country's large tuna fishing fleet and home to an automobile assembly 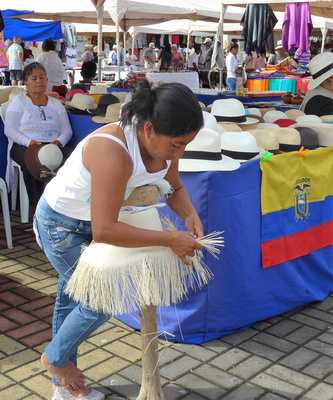 Around Manta, there are quaint fishing villages with beautiful beaches, (Manta is home to the S. American windsurfing championships), tropical dry forest of the Pacoche Natural Reserve and the town of Montecristi.  Founded by the Spanish in 1628, Montecristi is famous as the birthplace of the famous "Panama hat".  These hats have been woven by hand here for over 400 hundred years and their design has barely changed at all.  The finest Panama hats made in Montecristi can take months to weave and can cost thousands of dollars - although I think the one I bought for $20 is pretty nice itself! At 9:23pm the ship was at 00 degrees and 00 minutes longitude -- meaning the Equator; so I've now crossed the Equator by sea north-to-south and south-to-north!  Next, I'm of to travel through the Panama Canal and then stop in Cartagena, Colombia before hopping among the Caribbean islands.  As for today - happy Valentine's Day to some and Happy Single Person's Day to the rest of us :)

SAL JOHAL PHOTOGRAPHY
You're right David - it was tough to leave some of the great places I visited but I guess it just means that I've some new places to add to my list of "must revisits". I'm looking forward to wearing my Ecuadorian-made Panama hat at Cordova Bay soon (hopefully it's nice and warm by the time I get back). Cheers.
David Greer(non-registered)
Last year in Manzanillo Mexico we made a special trip to the state capital Colima to find good panama hats. After I bought a very nice one, I looked in the rim and saw "Made in Ecuador" — maybe in the very workshop you watched them being made. Panama hats are so smart and comfortable though a little prone to cracking especially if you have a fat head like mine. Best substitute I have found are the fedora-like hats sold at Cordova Bay golf course that look a lot like panamas but are made of paper but very durable and foldable. Those wooden balconies in Lima are incredible, so elaborate. Sure you want to leave South America, Sal? You are an adventurous soul and you have only scratched the surface!
No comments posted.
Loading...
Subscribe
RSS
Recent Posts
Port Chalmers-Dunedin Fiordland National Park, New Zealand Hobart Tasmania Melbourne Australia Sydney Australia New Caledonia Fiji Amerika Samoa Of to the south Pacific Cartagena
Keywords
cartagena panama canal chile falkland islands montevideo rio salvador and buzios cape verde islands ilha da madeira london
Archive
January February March April May June July August September October November December
© SALJOHAL
Powered by ZENFOLIO User Agreement
Cancel
Continue