"Your time has come to shine; all your dreams are on their way. See how they shine."

In the early 1900s, a few men left the small Indian village of Salempur in Punjab to find work in Panama during the building of a great canal; and in 1930 my grandfather and great-uncle made the same long journey.  Because of that history, it was a special experience for me to finally see and travel through the Panama Canal.  The full crossing took nine hours on a hot humid day and I stayed on the outside decks most of the day to see as much as possible and reflect on what experiences my relatives and others would have gone through, a hundred years ago in this tropical rainforest.  Besides the family connection, learning more  about the actual building and functioning of the Panama Canal was fascinating in itself.  Before getting into the details on how the canal works, here's a bit of history on the region and the building of the canal.

Christopher Columbus was the first European to set foot in Panama when he came here in 1502 (I was surprised to learn that this was the only landing he ever made on the American continent - apparently he landed at the site of Manzanillo, which is where the city of Colon is now situated).  It was eleven years later that the Spaniard Vasco Nunez de Balboa became the first person to see 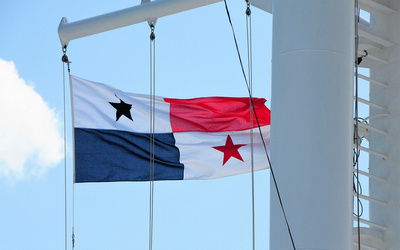 the Pacific Ocean from Panama, and so the port of Balboa on the Pacific side of Panama is named after him.  However it was actually the French who took the initiative to try to build a canal through Panama.  Ferdinand de Lesseps had famously just completed the Suez Canal in Egypt, and in 1876 he led a committee to design and build a canal across Panama.  With money from many European investors, de Lesseps and his team brought over tons of equipment, workers from all over the world and plans for construction of a canal in the same manner as the Suez Canal.  Unfortunately they horribly failed to take into account the vast differences between building a canal in an arid sandy region and one in a mountainous tropical rainforest.  Their plans to dynamite and cut through the Continental Divide valleys failed miserably; their construction would see some progress and then days on end of heavy rain would flood worksites and cause avalanches of mountain boulders to fill in valleys they had worked on.  In the end, after little progress, the company was forced to abandon their work and declare bankruptcy.  At that point, American investment came forward to take over the project and designs were changed to better suit the terrain and climate and work progressed.  Instead of clearing mountainous land to make room for ships to go through a canal, the Americans built a dam on the Chargres River and, from 1907 to 1913, the vast Gatun Lake was formed.  This lake provides the deep channel for ships to sail across Panama; and at the same time locks were added on the Pacific and Atlantic sides to raise and lower ships on entry-exit to Gatun Lake.  This plan proved to be a success and, although the inhospitable climate, malaria and other diseases and countless construction accidents led to thousands of worker deaths, the Panama Canal finally opened to traffic in 1914.

Although the 48 mile long Panama Canal is a remarkable engineering feat, the way it works is actually quite simple.  Depending on the direction of travel, there is a series of three

Waiting for water levels to equalize in Miraflores Locks

locks that raise or lower a ship to various key 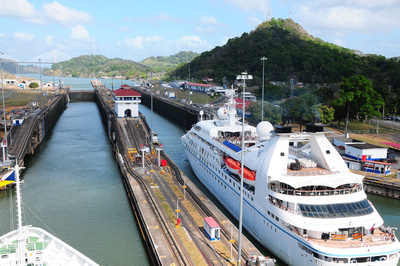 levels much like going up or down a staircase.  Coming from the Pacific side, the ship enters the first chamber of the Miraflores Locks - the first chamber gate is closed behind the ship and water from the second chamber is added to the first chamber until the two are at an equal level.  At that point, the ship enters the second chamber, gate is closed behind it and water from Miraflores Lake is added to bring the ship to the level of Miraflores Lake; the two-chamber system has raised the ship 54ft from the level of the Pacific Ocean.  This lake is only a mile long and the ship then enters the single-chamber Pedro Miguel Lock, which raises the ship another 31ft to the height of Gatun Lake.  The ship then travels through the Culebra Cut, a nine mile long path that slices through the Continental Divide, and into the massive Gatun Lake.  Finally, at the eastern end of Gatun Lake, the three-chamber Gatun Locks lower the ship 85ft to the level of the Caribbean Sean and Atlantic Ocean.  The full transit for a mid-sized cruise ship takes 9 hours while a container ship will take 24 hours to go from one ocean to the other via the canal.

Here are few other interesting facts/figures...

In 2007, the Panama Canal Expansion Project was started.  It included deepening and widening of the two ocean entrances, widening and deepening of the Culebra Cut and Gatun Lake, building of a new second set of locks and water-reutilization basins, and adding a new four mile Pacific Access Channel.  Today, with the second set of locks in operation, larger tankers are able to travel through the Panama Canal and work is progressing on adding a third set of locks and traffic lane to allow even larger ships with expanded cargo capacity to use this man-made wonder.

One of many Panamanian container ports

These and other photos from this really interesting experience are in the "Panama Canal" gallery under the 2018-Rediscovery folder.  Now it's of to Cartagena and then the Caribbean -- cheers!