"Can I sail through the changing ocean tides; Can I handle the seasons of my life"

Slotted between Argentina to the south and west and Brazil to the north, Uruguay is the second-smallest country in South America.  It is a country of scrubby woodland and large grassy prairies that extend into the northern third of Argentina.  More commonly known as the Pampas, these nutrient-rich prairies

were formed by finely eroded materials deposited here from the Andes Mountains by wind and water.  Much like the Canadian prairies and the US midwest, the Pampas are considered the breadbasket of South America and are used to raise cattle and grow cereal grains.

More than half of Uruguay's nearly four million residents live in the port city of Montevideo.  The capital of Uruguay, Montevideo was discovered in early 1500s when the Spanish explorer Juan Diaz de Solis sailed into Rio de la Plata, the estuary of the Parana River system (apparently this is the world's largest river estuary).  He claimed the whole area for the Spanish Crown but was later killed by Indians a little further down the estuary in what is today the Spanish-style city of Colonia.  As no gold was found in those early days the Spanish put little effort into developing the region, and it was only after several clashes with the Portuguese and French over the next two centuries that the Spanish finally formed Montevideo as a fortress to keep others out.  Today, the broad Rio de la Plata estuary serves as a natural border with Argentina along its southern shore and Uruguay to the north; and further west into the estuary sits Colonia directly across from the Argentine capital of Buenos Aires.

Montevideo is a beautiful city full of well preserved colonial Spanish architecture, over thirty museums, countless plazas and parks full of trees and 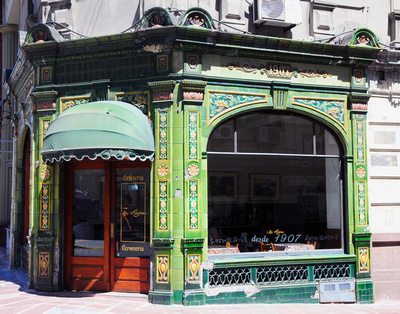 fountains, and lovely sandy beaches.  The friendly and welcoming residents are mostly of Spanish and Italian heritage and, along with many open-air cafes and restaurants, give the city a strong European feel.  The city (and Uruguay overall) seems so welcoming - the streets are clean, parks are full of trees and benches and circuit-training equipment, public transport is everywhere and there don't appear to be large slum areas anywhere.  Uruguay has been a leader in the Western Hemisphere and certainly on the continent with respect to social programs; there is an eight-hour working day, paid holidays, seniors' social security, free medical, nationalisation of essential services, and numerous other programs designed to foster a high standard of living and strong democratic processes.  Even with all the positives going for it and the exception of key beach areas to the east of Montevideo, Uruguay is still not a major tourist destination and most visitors are from other South American countries - but that doesn't take away from the fact that Montevideo is a great place to visit. 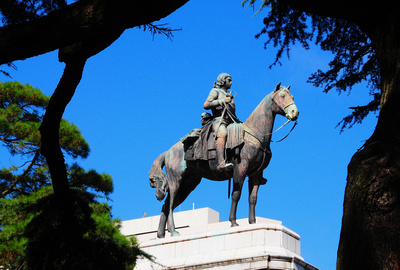 One of the biggest plazas in Montevideo is the Plaza Independencia with the mausoleum of General Artigas in the centre, Government House and Teatro Solis (main opera house) along its east side, and the Canadian Embassy on the north side (it was closed for siesta from noon-2pm!).  Meanwhile, on the west side of the plaza is a large apartment building that stands in stark contrast to the colonial stone buildings around the rest of the plaza.  Another beautiful plaza/park is the Plaza Zabala which is dedicated to a former governor who founded Montevideo in 1726.

Of all the museums in the heart of Montevideo, I'm glad I walked through the Museo del Gaucho (Gaucho Museum).

Located in a beautifully preserved Spanish-style mansion, the Gaucho Museum covers the history of these "South American cowboys" and features displays of their weapons, tools, leathers and other equipment.  The gaucho came about in the late 1700s and made their living by capturing wild horses that had escaped from large ranches starting to form across the land, and they would then use these horses to capture stray cattle on the plains.  Their nomadic lifestyle led to legendary stories of the gaucho roaming the plains with a thick poncho over his shoulder (serving as a blanket at night and a shield during a knife fight), eating livestock as needed and selling hides to buy tobacco, rum and tea.  With a kerchief around his neck, "bombachas" (roomy pleated pants) tucked into his boots, and distinctive sash and belt, the gaucho had a unique look as the South American cowboy. 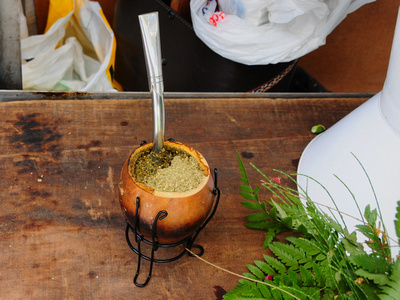 seen at all in Brazil was the drinking of "mate".  Going back to the Guarani culture before the Spanish arrived on the continent, mate is the drink made by adding hot water to yerba (dried leaves and twigs from the "Ilexparaguayensis" tree).  While tea became a popular drink in Europe mate grew in popularity across South America - primarily in Uruguay, Argentina and Paraguay.  Today, it is very common to see people either sitting or walking around with a gourd (the mate), a metal straw-spoon with a bulbous end with fine holes in it (the bombilla) and a thermos of hot water.  The yerba mate (tea-like grind) contains caffeine and other nutrients and apparently makes a very stimulating tonic when placed in the mate gourd, a little water is added and the infusion is sipped through the bombilla.  While a kettle was used in the old days, adding a thermos has made mate drinking a very mobile and social activity.  Nope, I didn't get the chance to try any.

I can't finish this post without adding a little piece about a thrill I got.  In 1930, FIFA held its first ever football World Cup.

The tournament was held in Uruguay and the host country became the first winners of the Jules Rimet Cup (original World Cup trophy, replaced decades later by today's globe-like trophy).  The National Stadium in Uruguay is also home to the Museum of Football and this place has a pretty good collection of national and international memorabilia.  Among the many exhibits are the football trophies Uruguay won in the 1924 and 1928 Olympics, and their 1930 and 1950 Jule Rimet Cups as FIFA World Champions.  It was great just seeing the trophies and reading old articles, but after taking a few photos I couldn't help but try something.  Some of the trophies were just sitting in the open while others were behind plexiglass with small openings.  I probably shouldn't have but I just couldn't resist putting my fingers through one of the openings and touching the very first Jules Rimet Cup.  Having played football all my life and being a diehard fan, this was a pretty neat thrill.

This post is definitely longer than the previous ones but I really liked Montevideo and thought I'd share as much with you as I could. I think I'd like to see more of Uruguay (Colonia and the Pampas for sure) and so it's definitely going on my list of places to travel to again one day.

All the photos from Montevideo can be found in the Montevideo gallery within the 2018-REDISCOVER collection.  Adios for now!