"When she passes, each one she passes goes 'Ah' "

Rio de Janeiro is the second-largest city in Brazil after Sao Paulo and is known simply as "Rio".

In 1502, Portuguese sailors entered a large bay and thinking it was a river estuary named the spot Rio de Janeiro (River of January).  Following some key battles with the French, the Portuguese finally settled the broader area in late 1700s and Rio flourished as a major trade port for gold, sugar cane and other good being sent to Europe. 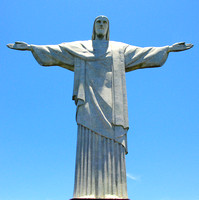 Today, Rio is a city of about 7 million people.  It is well known for it's magnificent harbour surrounded by lush mountains - the iconic Sugar Loaf and Corcovado being the two prominent landmarks.  Corcovado Mountain (literally "hunchback mountain") is home to the world-famous statue of Christ The Redeemer.   Built out of soapstone, the statue was completed in 1931 and is 125 feet tall and weighs over 1,100 tons.  There are views of the entire city, beaches and Atlantic from Corcovado and I was fortunate to be there on a clear day (apparently it's hazy and overcast more often than not). 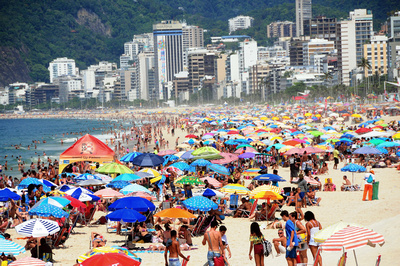 Of course Rio is also famous for its beautiful beaches, the most popular ones naturally being Copacabana and Ipanema but Flamengo Beach at Botafogo Bay and Leblon are just as lovely and busy.  The beaches are packed with people sun-tanning, playing beach soccer and volleyball, or just hanging out with groups of friends.  There are countless colourful flags of soccer teams, counties, businesses or other groups flying as markers of where different groups are camped out on the beach.  Copacabana is indeed the playground of the rich and not-so-rich.  The curved two miles of beautiful sand is followed along by hotels and apartment buildings; young people who bought relatively inexpensive apartments here many years are now senior citizens who walk across the street to enjoy the magic of Copacabana.  However, alongside the apartment buildings, more and more hotels have popped up these days.  The same is true for Ipanema beach, across from which a large favela has developed on the hillside. 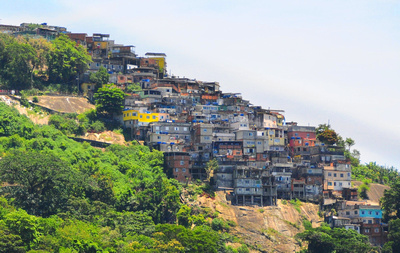 Favelas are commonly considered to be slum areas of Rio but in fact not all are true slums.  Many of these areas formed as people returned from fighting in wars only to discover that there was no work for them.  With no money or job and nowhere to stay, folks started living in run-down shacks within and around the city.  Today, there are quite a few favelas in Rio and efforts have been made to recognize them as residential areas.  Many have had roads put in, schools and clinics built, mail service started and city registration of addresses to recognize land ownership.  Some of the "shacks" are actually quite well built and even have air conditioning in them.  That aside, it is true that both petty and serious crime are on-going concerns within the  favelas and Rio itself, and I had quite a few people warn me along Ipanema and Copacabana to be careful with my Nikon as I wandered about.

In talking to some of the locals, there's a sense of frustration that this city is falling apart due to serious government corruption.  Folks told me that the stated inflation rate of about 3% is a joke as it's more like 30% for the average citizen - prices of everything have gone up dramatically over the past two years and there's almost a feeling of apathy that nothing is going to change even with elections coming up later this year.  A music producer here put it best when he said that people in Rio just don't think as a group and that there's no public togetherness in terms of protest and outrage over blatantly obvious corruption.  At the same time he says Rio is Rio and it still is a magical place.

It's hard to write about Rio - it's a city that has a unique feel and pulse to it.  I can only imagine what it must be like during the famous Carnival that's held here every February/March depending on when Easter falls.

All my Rio photos are in the Rio de Janeiro gallery - adeus!