"Misty taste of moonshine; teardrop in my eye"

After four full days crossing the Atlantic, the Portuguese "Bon Dia" has been mostly replaced with the more casual "Ola!" as I arrived in one of the oldest cities in the New World - Salvador da Bahia, capital of the state of Bahia. 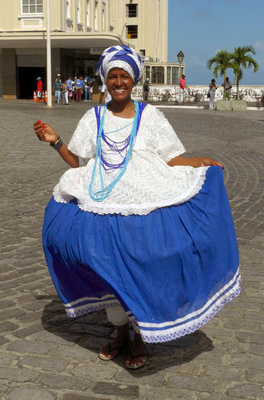 Known simply as Bahia to Brazilians and Salvador to the rest of the world, the city lies on a peninsula at the eastern Todos os Santos (Bay of All Saints); and for over 300 years it was Brazil's most important city flourishing with the export of sugarcane, diamonds and gold and importing African slaves.  The broad African influence continues to permeate throughout Salvador today.  Sadly, with Rio de Janeiro taking over as Brazil's main city in the 1700s, Salvador started on an economic decline that continues with unemployment and homelessness impacting many of the 2.25 million residents despite a major tourism push and modern chemical industry development. 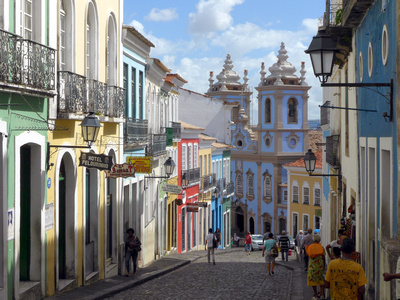 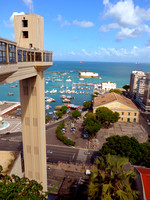 Salvador's city centre is starkly divided into a lower and upper city with a clanking electric lift (Elevador Lecerda) taking 50,000 passengers daily between these two distinct areas.  A few blocks from the elevator, there is also a blue fenicular railway that moves people up and down every three minutes.  A key part of the upper city is the Pelourinho, a historic area where gold-filled churches and beautiful homes from the glory days have been preserved and renovated and now serve as a major tourist attraction.  The Pelourinho has been described as a treasure of humanity by UNESCO and it's easy to see why as you stroll through cobbled streets lined with the world's largest collection of Baroque architecture. There are beautiful churches, bright homes and hotels and countless museums set up in renovated mansions.  With all the preservation and renovation efforts and it's African influences, Salvador (and in particular Pelourinho) offers a fascinating walk back in time.

After Salvador, it was a journey further south and west to the beautiful beach resort of Buzios.  Defined by beaches and secluded coves, Buzios is a town full of boutiques, restaurants and lovely villas situated on a small peninsula in the state of Rio de Janeiro. 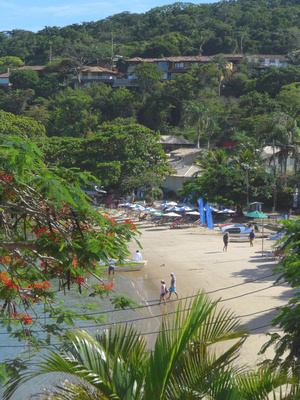 This paradise was an essentially unknown fishing village until the 1960s when Brigitte Bardot chose to escape the paparazzi hounding her and her boyfriend and came to his native Brazil. 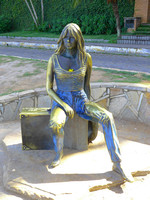 With no electricity at that time Buzios offered a simple life away from the hustle and bustle Bardot was enduring.  However her visit shone a spotlight on this quiet village and soon stars such as Mick Jagger, Madonna and others followed suit and it transformed into somewhat of a trendy resort paradise - fortunately without the big hotels and associated businesses.  Bardot's influence is still very much evident throughout Buzios.  The house where she first stayed is now a small hotel named Pousada do Sol; her name is attached to classic part of its famous cobblestone main road and the cinema, and she is immortalized in a bronze statue situated on the oceanfront pathway.

Looking back at its history, this peninsula was first settled by the Tamoio tribe about a thousand years before the Portuguese arrived in 1400s.  A hundred years after that, European pirates would take advantage of the many coves to attack ships

taking gold from Salvador to Europe.  Eventually the Portuguese overcame French efforts to take over the area and established Buzios as a safe haven for travelling ships and fishermen to shelter and fix their nets.  Today Buzios is still a small town, only stretching just over eight kilometers long and dotted with beautiful sandy beaches and quiet coves. I'd like to have visited with Brigitte.

You can see all my photos from Salvador and Buzios in the Salvador & Buzios gallery.  Next is Rio!!

SAL JOHAL PHOTOGRAPHY
Thanks for the feedback David. Can't say that I knowingly had capybara (in fact I'm positive as I've been pretty good at examining what I've been eating). There's definitely been a "rice and beans" feel to all the local dishes so far - mostly as it's a staple in Portuguese colonies, but there's also a big seafood influence due to every place being on the Atlantic Ocean. I've had some good conversations with locals but it's hard to put them in words - one of the things I've always enjoyed about travelling is sitting down with gentle local characters and saying hello (avoiding any touchy subjects of course). What I can say is that most people have been kind and welcoming and that's usually true with most places one goes as along as one doesn't act like a stupid tourist.

BTW, thanks everyone for reading these posts and looking at the photos (it feels great to hold a camera again) - I'm not sure what it'll all mean in the end but I'm glad you're enjoying them too.
David Greer(non-registered)
Great to see your updates and new images, Sal. How about a few details about some of the characters you meet on your journey? Hope you got to eat some capybara while on land — largest rodent in the world and a favorite dish of Brazilians — though you might not have even known you were eating it. Next stop Buenos Aires?
No comments posted.
Loading...
Subscribe
RSS
Recent Posts
Port Chalmers-Dunedin Fiordland National Park, New Zealand Hobart Tasmania Melbourne Australia Sydney Australia New Caledonia Fiji Amerika Samoa Of to the south Pacific Cartagena
Keywords
cartagena panama canal chile falkland islands montevideo rio salvador and buzios cape verde islands ilha da madeira london
Archive
January February March April May June July August September October November December
© SALJOHAL
Powered by ZENFOLIO User Agreement
Cancel
Continue