Why don't people talk to strangers?  I talk to strangers fairly often.  I just find it interesting to meet new people, especially seemingly unique people (I know, we're all unique in our own way but you know what I mean).  Sometimes, that first step of stopping and saying hello is all it takes to start a conversation that can be fascinatingly revealing. 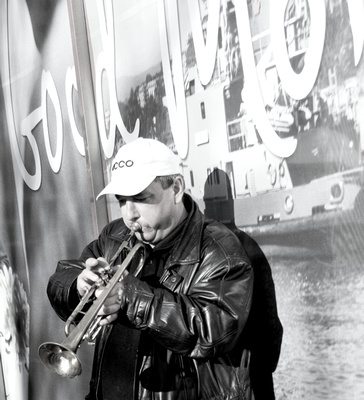 Bruce the street musician.Bruce playing his trumpet on Fort St. at Christmas time.

I was walking down Fort St. on Wednesday and heard some cool trumpet music from half a block away.  As I got closer, I noticed a couple of things.  First was that the trumpeter paid no attention to all the people just walking past him without a glance or pause to drop a dime in this trumpet case; present-laden bags hanging from their shoulders and hands.  The second thing probably explains the first - he seemed totally engrossed in his music as the sounds from his trumpet blended together to create a soft melody.  I stayed at somewhat of a distance and listened for a minute or two; then I went to carry on my way, pausing to place some coins in his case which looked quite bare.  Once again, I talked to a stranger.

I said hi and he stopped playing, smiled and said "You know, people like to hear some carols but they really don't pay attention so I just play the sweet sounds I like to play".  I told him I thought his playing sounded good and that's when his love of music really came out.  He started telling me stories about Mel Torme, Ella Fitzgerald, Sammy Davis Jr. and others - not just stuff you may already know, but neat stories about compositions and back-up musicians and concerts and battles and so forth.  He went on to talk about J. Geils and Frank Zappa and the interesting musicians they had in their bands.  He told me about neat dvds he's watched, about records he had lost and slowly repurchased, and things I should look for at Lyle's.  Everytime we'd near the end of a story, he'd say "I don't want to keep you but let me tell you this one story about Peter Wolf and Seth Justman when they were with J. Geils".  Next thing you know we're talking about the benefit concert for Boston Strong (J. Geils performed), and Amy Winehouse and others.  I certainly listened way more than I contributed to the conversation, and fought the urge to ask him about his own story and how he ended up a street musician in Victoria (he mentioned where he lived and that led me to not delve into his history).  As I listened, people continued to stroll by with their Christmas shopping.  After about fifteen minutes, I had to leave but I held out my hand and said "I'm Sal".  The trumpeter smiled and took my hand and said "Oh yeah, I'm Bruce - nice to meet you".

[with Amy Winehouse being the last person Bruce and I chatted about, I thought I'd share this little video/song with you... enjoy! http://www.youtube.com/watch?v=nOEQKCqCjOo] 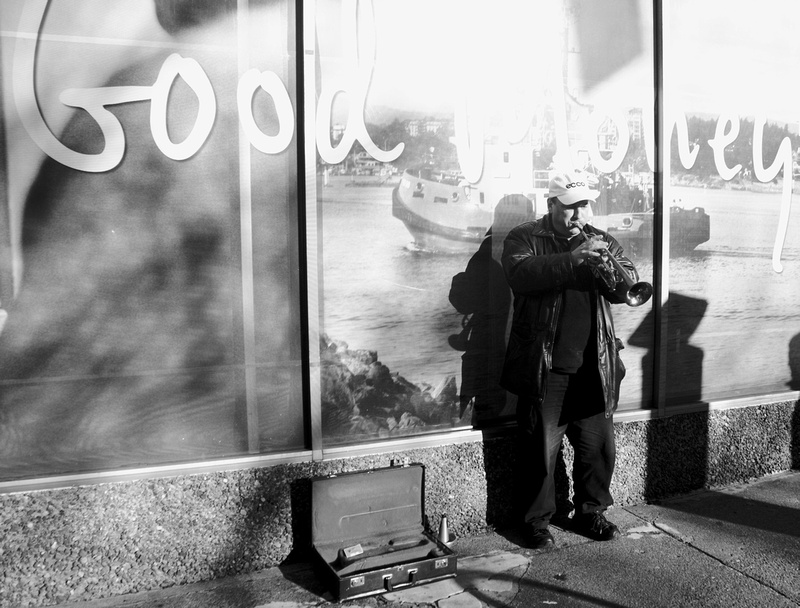