"It reminds me of the place we used to go.  But all I have is a photograph..."

It doesn't seem surprising to me that my first blog post in 3 years is while I'm sitting in central London.  This place has always held a soft spot in my heart - primarily due to the nine years

we lived in Southall with dear family and friends nearby, but also because of the school trips from Northolt Primary School to various spots of interest in around London.  Those school trips and history classes left me with a love of anthropology and history such that any walk about around this city still makes me dream about what life was like here centuries ago.

It's not just the royalty and related stuff but more so the age and style of everything London holds - the buildings, the Underground, the numerous parks, the statues...it goes on and on.  Each little part of London has it's own history and uniqueness about it.

Of course royalty and related folk are the subject of many of the sights in London.  There's Buckingham Palace, Royal Albert Hall, Kensington Palace and various other such spots.  But there are many other things about the city that I enjoy being in and around.  The 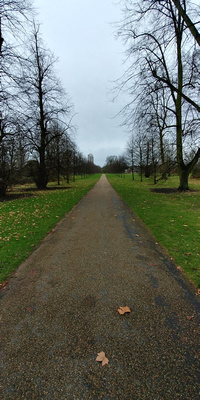 parks are fabulous - large and green and treed and everywhere.  It's easy to get from one part of London to another by simply walking through various green spaces; yet you can still walk less than two blocks and find yourself at one tube station or another...there can be no complaints about getting around this city.

I've been here three years in a row now and it seems double-deckers and the tube station signs aren't what my eyes are attracted to these days.  More so it's the old architecture, the streets and houses/residences that tug on my memory.  Many remind me of the streets and mews around the towns and cities we used to hang out in as kids.  There's something about the old stones and bricks, the designs and street layouts that I still find intriguing.  It's thought-provoking to me how such a large city from such an ancient time could have life flow so smoothly through it with today's population and hustle and bustle.

Of course the charm and beauty of a place has its price.  I can't believe (or maybe I can) how expensive it is to live here!  Condo/apartment living will set you back about 2 Million Pounds to own - and that's in the Kensington area.  Meanwhile even renting would be tough for most folk these days; average rents that I saw at realtor/to-let offices were in the range of 500-800 Pounds A WEEK!!  Yup - beauty, culture, history and allure have their price.

The Serpentine waterway in Hyde Park

It's been great two days here but it's time to move on tomorrow (Wed.).

An interesting thing happened yesterday - I saw a statue that I don't recall ever seeing before.  This is Prince Henry.  He is also known as Henry the Navigator.  It seems fitting that I should run into him on this visit as tomorrow is when I set off on my adventure to circumnavigate the South American continent.  Prince Henry is the one who taught most of the famous explorers we've all heard about - Columbus, Magellan and the others.  They all learned about naval navigation from Henry the Navigator (yes, you can insert your joke about how Columbus "discovered India" but it was in fact America!).  So, in part it's thanks to Prince Henry that I'm of to go through the Straits of Magellan and go around Cape Horn -- thanks Henry!

That's it for now - check back for updates on the adventure that starts tomorrow.

Happy New Year everyone - may it bring you safe, happy and healthy adventures!