[PLEASE NOTE:  There's opportunity for me to capture many more images in ports than can be posted into a blog. So in order to better share with you what each place is like, I've started putting photos from each port into a gallery on this website. The gallery is called "2018 - REDISCOVERY" and I'll have folders in there for you to view all the photos from each place in a slideshow. The first folders are already posted - "Ilha da Madeira" and "St. Vincent"...enjoy!]

"The First Mate shouted from the Crow's Nest: 'I think I might see land out there'."

After two full days at sea, I have to admit it did feel good to see the lights of land as the ship arrived in Ilha da Madeira just after sunset on January 6. 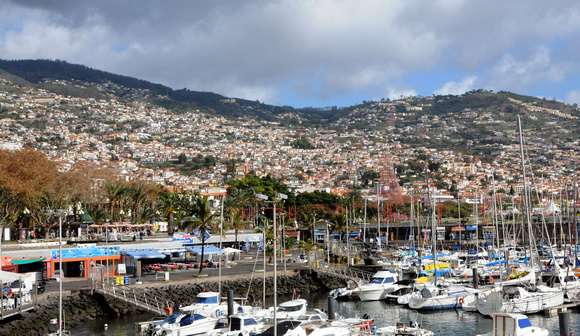 There are three other small islands in this Portuguese archipelago just west of Morocco, but Madeira is the main island with over ninety percent of the 300,000 population.  The island is famed for its flowers, tropical  fruit, stunning cliff tops, pine forests and the famed Madeira wine (think of port). 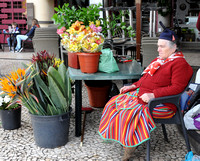 It's history goes back at least 600 years as some of the churches and other buildings here are from the mid-1400's. Based on its location, it's likely that early explorers used Madeira as a stopping point for rest and supplies on their voyages of discovery out of Portugal, Spain and England.

The capital city of Funchal is the main port and is a beautiful city.

Spreading out along the bay, the city also climbs up the mountainsides with terracotta roof tops adorning pastel-coloured homes. There's a cable car that takes you high above the seaside to Monte, where there are some magnificent old churches and residences converted to classic hotels - all with great views of the area.

Madeira is also well known today because of one former resident; Madeira is the birthplace of Cristiano Ronaldo and there's a CR7 statue, hotel, museum and restaurant right on the waterfront.

It's a beautiful place set in a lovely location - check out the city through my photos in the Ilha da Madeira folder through the "2018 - REDISCOVERY" link.