I was thinking earlier this week that I hadn't done a post for a couple of weeks now (although the blog idea is working and I'm taking more photos), and so today I was going to do a new post and share some recent work.  However, in reading the news online like I do most mornings, I struck by some sad news and had to change my planned blog for today.

Earlier today in eastern Afghanistan, two journalists were shot by an Agfhani policeman as they sat in a car with others.  It is a day before the start of the national election and they were just doing what they loved.  Fortunately Canadian reporter Kathy Gannon was only wounded in the unexpected attack, but sadly Asscoiated Press photographer Anja Niedringhaus was killed.  Anja was a highly regarded photographer whose photos not only showed the war/fighting side of the news, but also told the stories and lives of the local people and the impact of events around them.  I had seen some of her work on the net over the years and thought it was great.  The following link shows some of her work:

Anja is just the latest of many photographers killed while doing their jobs.  There were at least 70 journalists killed around the world in 2013, and there has already been 14 killed so far in 2014.  Some of the ones I read about in 2013 were the following cameramen.

Molhem BarakatMolhem Barakat died on Friday Dec. 20, 2013 as he took photographs in Aleppo of a battle over a hospital between rebels and forces loyal to President Bashar al-Assad.

On December 20, 2013, Syrian photographer Molhem Barakat (photo on the left) 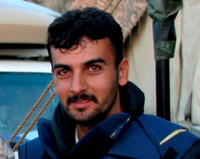 was killed as he photographed a battle over a hospital between rebels and forces loyal to President Bashar al-Assad.   Molhem worked for Reuters on a freelance basis and, like Anja, as well as covering the conflict took pictures showing the life of ordinary Syrians in Aleppo.

A few weeks earler on December 4, also in Syria, Yasser Faysal Al-Joumaili (photo on right) was killed execution-style by members of the jihadist group Islamic State of Iraq and the Levant.  Yasser was a freelance Iraqi cameraman and was the first foreign journalist to be killed by an armed opposition group in northern Syria.  Sadly he's not been the last.

Of course it's not just Syria and Afghanistan where photographers have faced death while doing their work; they risk death all over the world in an effort to ensure the rest of us see what's happening in areas of turmoil and distress.  One of the saddest of these stories in 2013 was the death of Ahmed Assem, a young Egyptian photographer who unfortunately chronicled his own death in July while covering the violence between Egyptian security forces and pro-Muslim Brotherhood protesters. 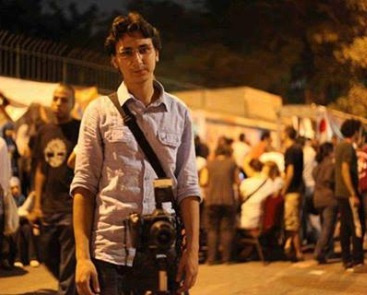 Ahmed AssemThe 26-year-old was one of more than 50 people killed when security forces opened fire on supporters of the Muslim Brotherhood and ousted president Mohamed Morsi. The video shows Assem filming a sniper, who then turns to point his rifle at the camera which in turn goes black.

Twenty-six years old, Ahmed worked for Egypt's Al-Horia Wa Al-Adala newspaper and was among over 50 people killed after security forces opened fire on a large crowd camped outside the Egyptian army’s Republican Guard officers’ club in Cairo.  Ahmed had been filming as morning prayers ended and turned his camera to the security forces firing into the crowd from a high vantage point in an adjacent building.  This work became his last as Ahmed's video captures a soldier shooting at the crowd with a rifle and then the gunman turns his aim directly at Ahmed - and the video goes black.

I know we'll hear of more tragedies like the deaths of these fine journalists as strife and turmoil continue around the world.  However, let's make sure we honour their work and bear in mind the risks photographers and journalists take each day to bring us the stories and photos that need to be seen.  Next time you see a photo or video from a conflict zone, take a second to note the name of the photographer/journalist who risked their life to capture that moment for the world to see.